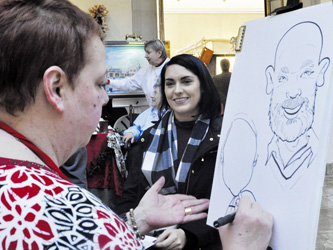 Bernadette Melago of Youngstown gets her caricature drawn by Angela Love at the Butler Museum on Saturday.

YOUNGSTOWN — Although it was their first time at the The Butler Arts & Crafts Show on Saturday, Billy and Bernadette Melago of Youngstown already knew their first stop.

Taking turns sitting for Angela Love as she drew their caricatures, the couple joked and laughed.

“She taught me how to do this, and I’ve done it once, twice,” Billy said, with Love adding she drove to Youngstown years ago to watch her former student make his debut.

Love taught Billy, a local artist, at the now-defunct Art Institute of Pittsburgh.

“When I showed up, he was being interviewed” by media, Love said, noting that time has come “full circle.”

Organizers of the 49th Annual American Holiday at The Butler Arts & Crafts Show felt confident in the traffic Saturday, said Cynthia Anderson, chairwoman of the event.

Anderson estimated that through the weekend, about 3,000 people would attend the craft show.

Each year, organizers don’t necessarily have a goal in mind that they would like to raise, Anderson said.

To help supplement the funds generated by admission, Anderson said a chance auction also takes place. Artists donate one piece of art, with some donating more, to be auctioned. Some people can win multiple prizes, with tickets costing $10 for 25.

This year, 76 vendors were hosted by The Butler for its largest fundraiser of the year.

Anderson said the show is juried, which means vendors have to send samples of their work to be judged so they can get a table. “That makes it a little different from many craft shows,” she said.

Newton Falls residents Jim and Patty Gore have attended the craft show every year for about 20 years now, because of the quality of product offered.

“You get so many things you don’t see at a normal craft show. It’s a step above,” Patty said.

The couple agreed they use the outing to peruse, shopping for themselves.

One item Patty purchases every year is an animal pin, of which she said she has a collection.

Jewelry, pottery and household items are among some of the goods on display, although Anderson said organizers are looking for more traditional painters for next year.

WHERE: The Butler Institute of American Art, 524 Wick Ave., Youngstown

HOW MUCH: $7 admission, or $6 with a canned food donation for Second Harvest Food Bank