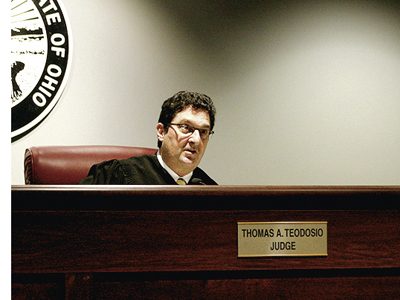 AKRON — The attorney for Ralph Infante argued Tuesday that the most serious conviction for the former Niles mayor — engaging in a pattern of corrupt activity — should be thrown out on the grounds that Infante’s acts did not qualify as a criminal conspiracy.

Attorney David Doughten, representing Infante, squared off with Daniel Kasaris, an attorney with the Ohio Attorney General’s office, before three visiting appellate judges in the 9th District Court of Appeals.

The judges are hearing the appeal of Infante’s convictions and sentence on assignment from the Ohio Supreme Court because the judges in the Warren-based 11th District Court of Appeals recused themselves from hearing the case. The appeals judges will issue their written opinion later.

Doughten said the corruption charge, which is the state’s version of the federal Racketeer Influenced Corrupt Organizations Act, requires the enterprise to be “separate and apart from the criminal activity involved.” Instead, Infante’s violations are “isolated,” Doughten said.

“What is lacking in this case is, there was no enterprise. The offenses to which he was convicted were all personal, were all things he essentially did by himself and frankly didn’t need the assistance of anyone else,” Doughten said.

Infante, 64, was sentenced to 10 years in prison in May 2018 after a jury in Trumbull County Common Pleas Court found him guilty of 22 criminal charges. In addition to the engaging offense, jurors found him guilty of 13 counts of tampering with evidence and lesser counts of theft in office, having an unlawful interest in a public contract, gambling and falsification.

Prosecutors said his offenses took place throughout Infante’s 24 years as mayor ending in 2015.

Doughten said the tampering convictions are a good example of what is wrong with the corruption conviction. The offenses pertain to providing false information on tax returns and failing to report money he received, including from gambling. “Those are individual violations,” Doughten said.

So everything Doughten said about the need for “separate and distinct” disagrees with the ruling, Kasaris said.

There were people who helped Infante run a 20-year criminal enterprise, Kasaris said, including his wife, Judy Infante, and Niles employee Scott Shaffer, who “for three years” went to a Warren scrap yard, making 34 trips there and collecting $3,292 for scrap metal belonging to the city and giving it to Infante, Kasaris said.

“This wasn’t a day or two thing or short period of time as [Doughten] wants you to believe. It was three years. The enterprise had structure. It had a purpose, and it was long,” he said.

City employee Brian Paridon also collected scrap metal money, gave it to Shaffer, who gave it to Infante, he said.

Another example is the gambling that was centered around the ITAM Club that Ralph and Judy Infante ran for more than 20 years, Kasaris said. In addition to the Infantes, Denise Danielson, who testified at Infante’s trial, helped manage the gambling operations.

Danielson was not charged.