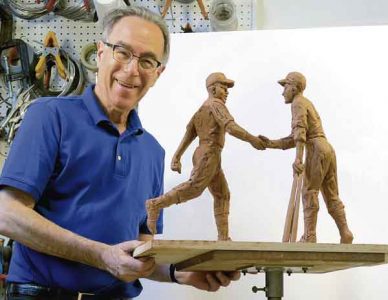 YOUNGSTOWN — What’s in a handshake? If it involves Youngstown and Major League Baseball, it ensures a firm grip on a piece of history.

A larger-than-life statue commemorating the inspiring 1946 handshake of Jackie Robinson, the first African-American Major League Baseball player, and George “Shotgun” Shuba, his white teammate from Youngstown, will inspire better relations among people of different racial backgrounds, said leaders of a group planning to build the statue in downtown Youngstown.

The Economic Action Group, a downtown development advocate and the newly formed Robinson-Shuba Commemorative Statue Committee aim to raise $400,000 to complete the statue and dedicate it on April 18, 2021, the 75th anniversary of what some have called “the handshake of the century” following Robinson’s first home run in mainstream professional baseball.

The idea for the statue originated when Eric Planey, a Youngstown native and former regional chamber vice president who now works as a New York finance executive, was visiting family four years ago in Alexandria, Virginia. He said he had been attending his niece’s softball practice when he met a coach who, coincidentally, also hailed from Youngstown.

The elderly coach relayed the story about “Shotgun” Shuba to Planey and his brother.

“My brother was very amazed about it, and I had no idea who Shotgun Shuba was,” Planey said with a chuckle.

He said he was “blown away” after looking him up, and he began wondering why no tribute to the historic moment exists in Shuba’s hometown of Youngstown.

Planey said he soon reached out to Youngstown 1st Ward Councilman Julius Oliver to share his idea and then to Louis Zona, executive director the Butler Institute of American Art, who referred him to noted Connecticut sculptor Marc Mellon.

Mellon is using his art to memorialize the historic moment.

“A handshake at home plate by players of different races is no big deal in America today, but in 1946 it was a historic moment,” said Herb Washington, a local businessman, former Major League Baseball player and one of the co-chairs of the committee. “We want to memorialize that moment in a way that inspires people to relate more respectfully to those of other races. We need more Americans to follow the examples of Jackie Robinson and George Shuba.”

Another committee member, Patty Brozik, a retired Community Foundation of the Mahoning Valley president and banker, said the statue could put Youngstown in the national spotlight.

“Jackie Robinson fought through incredible hate and adversity throughout his career yet became one of the greatest baseball players the game has ever known,” she said. “George’s handshake demonstrated respect for Jackie’s achievements and showed the world what things could be like without barriers based on race. We’re confident that many in the Mahoning Valley will want to join us in supporting this effort.”

The bronze statue would portray the handshake as captured in a landmark photograph now owned by Mike Shuba of Youngstown, George’s son. Both players would stand nearly 7 feet tall in bronze at a site in Wean Park near the Youngstown Foundation Amphitheatre, where they would enjoy high visibility.

Robinson enjoyed a Hall of Fame career with Major League Baseball’s Brooklyn Dodgers, but he began his mainstream baseball career with the Dodgers’ minor league affiliate, the Montreal Royals, after playing in the Negro Leagues. Robinson’s first game with the Royals was a major media event in New Jersey against the Jersey City Giants, with a huge crowd in the stands and the city’s schools ordered closed to mark the occasion.

In his second at-bat, with two other Royals on base, Robinson hit a home run. Both teammates who scored on the homer went into the dugout without waiting for Robinson to congratulate him.

Shuba, who was on deck, noticed that, so he stepped right up to shake Robinson’s hand just as the future Hall of Famer was crossing home plate. The photo captured that moment — the first handshake of black and white players on a professional baseball diamond.

“In our book, George is quoted as saying he didn’t think at the time that shaking a black player’s hand was a big deal,” said Greg Gulas, a retired Youngstown State University sports information director and another committee co-chair. “He had played with black and white guys at Chaney High School and in sandlot games in Youngstown for years. He shook Jackie’s hand because he had just hit a three-run homer. George was proud to be Jackie’s teammate for the Royals and the Dodgers, not because Jackie was black but because he was an incredible baseball player.”

Ernie Brown Jr., a former Vindicator regional editor and another committee co-chair, added, “The fact that George stepped up after his teammates ignored Jackie’s achievement suggests that Youngstown was a little ahead of the game when it came to putting racial differences aside. That is the vision of Youngstown for many, and this statue will remind Mahoning Valley residents and visitors about that vision.”

The 1946 handshake drew an additional wave of national news coverage in 1996, its 50th anniversary, and in 2014, when George Shuba died. A 2014 New York Times story called the handshake “a simple, silent moment in baseball history.” MSNBC commentator Al Sharpton said George Shuba will “always be remembered for how he took the fight against racial injustice into his own hands with that handshake.”

Mike Shuba, who serves as a special advisor to the committee, said the framed picture of “the handshake” graced the living room of the family’s home since he was a child and was the only piece of baseball memorabilia his father ever displayed. George Shuba earned the nickname “Shotgun” because he reliably hit line drives with his consistent, compact swing.

During the 1990s and early 2000s, Mike and his father toured schools and youth centers across the United States to talk about the handshake and racial relations in sports.

“If my father were still around, he would be so thrilled and so proud,” Mike said. “That handshake with Jackie and the photo of it were among the highlights of his life.”

Mellon, who has crafted dozens of high-profile memorial statues, including those of Pope John Paul II, President George H.W. Bush, President Barack Obama and athletes Michael Jordan, Mickey Mantle, Arthur Ashe and Cal Ripken, has agreed to build the Robinson-Shuba statue and has also been serving as a special adviser to the committee. He recently completed an early study of the statue.

Planey said it’s expected to be created in a Brooklyn foundry and will take about 12 months to complete.

The project committee also is forming a national honorary committee of individuals with national networks who have ties to Robinson, Shuba and / or the Mahoning Valley.

Pecchia Communications, a public relations firm in Canfield, is supporting the project on a pro bono basis.

The committee now is pursuing grants from local foundations and donations from the public at its website, robinsonshuba.org.

The Robinson-Shuba Commemorative Statue Committee is seeking to raise $400,000 to complete the statue and dedicate it in 2021.