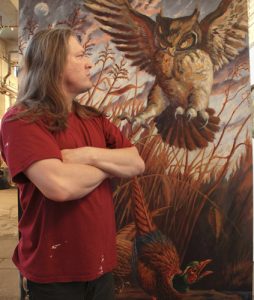 Submitted photo Youngstown artist R. Jason Van Hoose stands next to an owl that he painted. He prefers to capture natural environmental beauty in his works.

YOUNGSTOWN — Natural environmental beauty has been the creative muse for many visual artists. For Youngstown artist R. Jason Van Hoose, the inspiration was growing up in the countryside of Columbus and western Pennsylvania.

Over the years, Van Hoose has brought this influence into an urban setting.

“My teenage years were spent living in the countryside with my dad outside of Columbus,” he said. “My mom’s side of the family had a cattle farm near West Middlesex, Pa., and I spent many summers baling hay and working in the enormous vegetable garden.

“These experiences working outdoors greatly influenced my art making,” he said. “It has always been pleasing to me to capture the moody landscape of our region.”

For Van Hoose, artistic passion arises from the mysteries of natural order, which include the changing of the seasons, the deep moods of storms, evenings and the musky smell of a forest after a heavy rain.

“The things that contain a natural power that propels an artist forward through the complexities, challenges and drama of life all fuel my passion,” Van Hoose said.

The Butler Institute American Art in Youngstown has been the main display venue of his work in the Mahoning Valley.

“Early on, I realized that showing at the Butler comes with a significant prestige that is recognized in major art communities all over America and Europe. I’ve also shown my work at the McDonough Museum of Art, and other smaller, nonprofit organizations such as the Jewish Community Center and The Oakland Center for the Arts,” Van Hoose said.

During the 1980s, Van Hoose studied environmental science at The Ohio State University in Columbus. In 1986, he transferred to Youngstown State University temporarily, due to family issues. The transfer opened up a world of opportunity, he said.

“I found the YSU art department to be so rich and compelling that I enrolled permanently and began working toward a bachelor of fine arts in painting and ceramics.

“The Youngstown art community in the late ’80s was very different than our internet age of today. There weren’t quite as many artists in the area. At that time, artists had to network personally and travel a great deal more. Promotion and networking was far more labor-intensive than today,” Van Hoose said.

Artists then really pushed each other to hone their skills.

“We produced more art on a monthly basis than what I see artists producing today,” he said. “These days, one work can be created, then reproduced in a variety of technologically based ways. In the ’80s and ’90s, an artist was only as good as the last work they created. …

“We expected that the artists working in the Youngstown community would make sincere efforts to garner shows in large cities outside the Valley. The artist who landed shows in New York City had the most prestige,” Van Hoose said. “There was also the expectation that the successful artist would share their big city networks with the Valley artists who supported them.”

Many YSU art professors were involved in the New York City art scene at that time, he said. “Former Youngstown native and fashion designer Nanette Lepore launched her fashion career at the time. Almost immediately, my YSU professors encouraged us to drive to New York City.

“Prior to that, I was doing shows in Cleveland. I got involved with Cleveland artists who were doing shows in New York. These artists got me into doing my first solo exhibition in Chelsea, Manhattan, in 1998.”

Youngstown itself during the late 1980s and early ’90s was a massive network of musicians and artists, he said. Music venues such as Cedars Lounge and The Penguin Pub brought artists and musicians together

In 2004, Van Hoose got involved with the project YSU Penguin Parade, an open call for artists in the community to submit designs for fiberglass penguin sculptures. Later on, these penguin sculptures were auctioned, and the money was sent to charity. “My design was called ‘The Great Penguin of Ohio,’ and it was based on the design of the Great Seal of Ohio. The Cafaro Company selected my design to sponsor, and they had a big auction at Stambaugh Auditorium.

“In my entire art career, YSU Penguin Parade was the biggest project that made the biggest difference for me locally. It was a public art project that allowed me to demonstrate my painting skills and my vision,” Van Hoose said.

Over the past five years, Van Hoose has been involved with Fresh A.I.R. Gallery in Columbus, a division of Southeast Healthcare. The gallery supports artists who have been affected by mental illness or addiction.

Van Hoose said that the art community has changed and evolved over the years.

“Although it is hard to imagine, the art community these days is far less clique-oriented. There seems to be a greater openness to welcome people into groups and organizations.

“With technology and social openness complementing each other, we’ve seen the opening of several art galleries, the creation of public art projects and a growing vitality in the arts and entertainment industry. Local business leaders and government officials are now recognizing the economic and social importance of the arts in Youngstown in ways that we have not seen since the 1970s,” Van Hoose said.