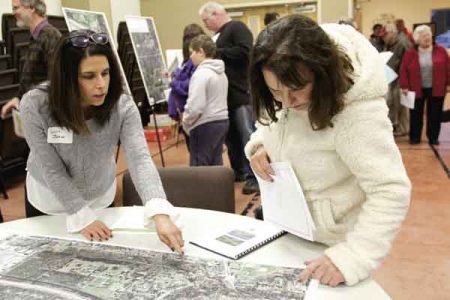 AUSTINTOWN — Most of the dozens of residents who attended an Ohio Department of Transportation meeting about the potential removal of Lanterman Bridge shared similar concerns about first responder response time and the condition of the roads.

If the bridge spanning Interstate 680 is removed, ends of the road will be turned into cul-de-sacs.

Fire Chief Andy Frost said the department conducted a study on response time and found that to reach houses at the far end of the would-be culverts it will take the department 3 minutes and 22 seconds longer than the 4 minutes and 31 seconds it currently takes with the bridge in place.

“It’s absolutely a big deal,” Frost said. “If you’re choking, having a cardiac arrest, heart attack — that 3 minutes could make a difference.”

Frost said in the past year the fire department has responded to 19 calls in the area.

“We understand the state’s position. They have to determine cost versus reward,” Frost said. He said there is a give-and-take in decisions, but for the fire department and residents, the bridge removal comes without much benefit. “Right now this is just a take and no give.”

Residents at the Thursday night meeting — which ODOT public information officer Ray Marsch said was like an “open house” — were able to talk to more than a dozen ODOT representatives, view maps and submit written comments.

Lanterman Road resident 11-year-old Ena Borky said she is concerned because her school bus takes the bridge, and now it will have to go around.

“I’m going to be late to school,” said Ena, who said she thinks the bus will come to her house later, potentially delaying her drop-off at Austintown Intermediate. Her sister, Annabeth, also rides a bus that goes over the bridge.

Marsch previously said ODOT is considering removing the state-owned bridge because it is more cost-effective than replacing the 52-year-old structure, which is nearing the end of its life span. He said comments gathered about the project will be considered before a decision is made. The work could be decided upon in 2020 with the project starting in 2022.

The cost of replacing and maintaining the bridge is estimated around $4.2 million, while removal and cul-de-sac construction is estimated just under $450,000, according to ODOT documents.

The bridge went through “minor rehabilitation” projects in 2001 and 2009 and was scheduled for “major rehabilitation” until the steel structure that supports the deck was found to be in poor condition, according to documents.

An ODOT study showed that removing the bridge increases average travel time for residents on either side of the bridge by about one minute. A traffic count of the bridge was previously estimated around 300 vehicles per day, though residents and officials have postulated that the bridge would be more traveled if county-maintainted Lanterman Road was in better condition.

Crum Road resident John Beniston said the bridge removal would divert more traffic to his road, which he said is already in poor condition. Like Lanterman, Crum is a county road, Beniston said.

Lanterman Bridge “was needed back then and it’s needed now,” Spalding said. She said with the bridge gone, she will have to go miles out of the way to reach her church, Four Mile Run Christian Church, where the ODOT meeting was held.

Others raised concerns about school buses turning around in culverts, Lanterman potentially becoming the last on the list for winter-weather maintenance, and increased difficulty for residents visiting family members just on the other side of the bridge.

Davis that the bridge removal would also put an “additional burden” on taxpayers, as Lanterman and its maintanence would become the responsibility of the township. The roughly mile-and-a-half stretch of road needs to be repaved, and Davis said repaving costs about $110,000 per mile.

“How much more can you place on residents?” Davis said.

YOUNGSTOWN — Help is needed to improve not only the city’s housing stock, but to protect those who want to ...

YOUNGSTOWN — Investigators have determined that the Brothers of Power Classic Car Club on Logan Avenue was ...