Residents march to save Fire Station No. 7 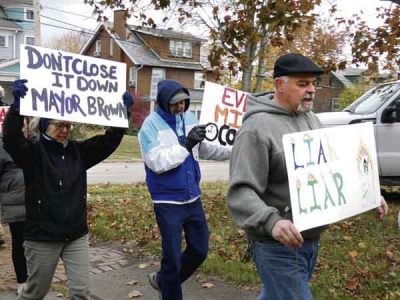 Mona Dischiavo, left, and her brother, John, center, participated in a march Saturday against the closure of the city’s Fire Station No. 7 because they are concerned for their mother who lives in the Smokey Hollow neighborhood. Robert Pilolli, right, owns a house at 206 Broadway Ave., that was heavily damaged by a fire next door at 208 Broadway that burned Oct 22. Station No. 7 is located on Madison Avenue at Elm Street. Staff photo / Beth Shiller

YOUNGSTOWN — Chants, including “The fire, the fire, let it go no higher,” could be heard on the North Side on Saturday afternoon as residents marched to protest the closing of Youngstown Fire Station No. 7 on Madison Avenue at Elm Street.

Residents marched down Madison Avenue, starting at 208 Broadway Ave., the site of an Oct. 22 fire, and ended at Station 7. The Wick Park Neighborhood Association hosted the march after learning of the city’s decision to close it without public input.

“Our group actually formed about a decade ago in response to a wave of arsons that were sweeping across this area. So we came together as a community, like we’re all doing here today, to take on the issues that were threatening our neighborhood, because that’s the only way we can fight this. We have to do it together. We have to stay strong together, we have to stay united,” Jonathan Blackshire, president of the Wick Park Neighborhood Association, said. “They serve a very dense population, and many of the buildings on this side of town are vulnerable to fires because they’re older. So this means response times even more critical. Every minute counts.”

Station No. 7 opened in 1903 and services the North Side, as well as Youngstown State University, making it one of the busiest in the city. That, along with other reasons addressed at city council’s Oct. 15 safety committee meeting, led residents to question the real reason the station is closing.

The reasons addressed include the cost to operate and maintain the station, the lack of restroom facilities for women, the perception in entering into a contract with someone under indictment, the structural soundness of the building and the plan to build a new fire station. The property is owned by developer Dominic Marchionda, who is under indictment for engaging in corrupt activity, among other charges.

“This is an area with historic and enviable housing. We are endangering that. Quite frankly, these are not reasons, they’re excuses,” Fifth Avenue resident Alexander Lamb said. “This place is worth saving. Losing this fire station is going to put many, many peoples’ lives at risk.”

The city has spent a few thousand dollars in the past 10 years to rent and maintain the building, which, according to the firefighters, is in good shape and does not need a separate restroom for the female firefighters to do their job well.

“The closing of Station 7 is not the way we should be responding to crisis. We should not be cutting our citizens off from basic safety and protection. Because of financial constraints, we have a duty to think both critically and creatively about how we can serve and protect our citizens, as well as the brave women and men who take up the noble mission to save us from danger,” Boyd said.

“I’m tired of balancing the city’s budget on the backs of safety forces,” added McNally, calling out both fire Chief Barry Finley and Mayor Jamael Tito Brown for saying in August the station would not close.

The Wick Park Neighborhood Association will be taking its concerns to the Nov. 13 council meeting and encourage Youngstown residents to do the same.

“This is the work of Tito Brown, not city council. We are tired of being left in the dark and want to bring light to this,” Blackshire said. “We want the city to do everything in its power to keep this open at least until we can get another one on the North Side. But this needs to stay open today.”