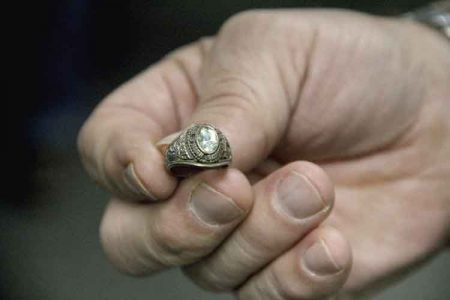 Staff photo / Allie Vugrincic Walter Sescourka of Cortland holds a 1981 Chalker High School class ring he found while metal detecting in a Youngstown park. Sescourka discovered the ring belonged to Denise Heakin, who now lives in Florida, and Tuesday returned the ring to her brother, John Badanjek of Southington, right, during the monthly meeting of the Tri-County Metal Detecting at Austintown Senior Center.

AUSTINTOWN — After more than 35 years, a Chalker High School class ring is on its way back to the original owner, thanks to Walter Sescourka of Cortland.

Sescourka found the 1981 class ring while metal detecting with a friend in a Youngstown park and took it upon himself to return the ring. He used the information at hand — the date, high school and a set of initials engraved on the inner band — to track the ring back to Denise Heakin, who now lives in Jensen Beach, Fla.

Tuesday, Sescourka presented the ring to Heakin’s brother, John Badanjek of Southington, during the monthly meeting of the Tri-County Metal Detector’s Club at the Austintown Senior Center.

Sescourka said the ring was found three or four inches deep, in proximity to a sidewalk and playground near Youngstown State University — where Heakin had attended school. Badanjek said she lost the ring sometime in 1982 or 1983.

“She knew she lost it a long time ago,” Badanjek said. He said she was “shocked” to hear it had been found so many years later.

“I figure nobody’s hunted that park because they should’ve found it,” said Sescourka.

Returning rings is not unusual for the Tri-County Metal Detecting Club, which has about 120 members, according to President Ray Borosko.

“We return rings, jewelry,” Borosko said. “With the price of gold and silver, it is something that most people that find these wouldn’t do.”

Borosko said the club is occasionally contacted by someone who lost a certain piece of jewelry. If they can give a general area where the item was lost, members of the club go to the area and search for it. Borosko said once someone asked the club to comb the rubble of burned-down house to find a ring.

“They get more of a kick out of returning it than finding it,” Borosko said. He said in the past the club has also helped police departments locate evidence.

Many of the historical items the club finds are donated to museums, he said.

To return Heakin’s ring, Sescourka got in contact with Chalker High School, where a secretary referenced a wall of old yearbook photos to match the engraved initials. The secretary then called Badanjek, who she knew still lived in the area, and he confirmed the ring belonged to his sister, in part because of a particular green stone.

Sescourka said he was happy to return the ring.

“Not everybody is keeping the stuff for themselves,” he said. “If it’s returnable, I like to return it.”