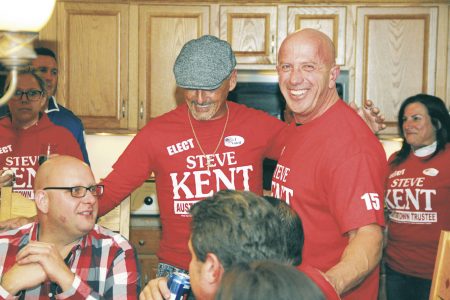 AUSTINTOWN — In a four-way race with no incumbents, Steve Kent took the lead for one open Austintown trustee seat.

Kent, 50, is a patrolman and school resource officer with the Poland Township Police Department and the Mahoning County OVI Task Force.

“I’m completely ecstatic,” said Kent Tuesday night as the results were coming in. “We put a lot of hard work in — all my family, my team. We just busted tail to do this. Hard work pays off.”

He had 41 percent of the vote when 72 percent of the ballots had been counted, according the unofficial and incomplete results from the Mahoning County Board of Elections.

Shepas, 46, rolled in at second with 27 percent of the vote, according to the partial count.

“Obviously I’m disappointed. However, through my business, Austintown Bounce, and personally, I will continue to support our community,” said Shepas. “I want to thank my family, supporters, and all who voted for me.”

Engler, 59, a former Mahoning County commissioner, who had 26 percent of the vote according to the partial results, said he was “disappointed.”

“We did a great job,” said Engler. “I wish Steve Kent much success.”

Kent said he looks forward to learning a lot as a trustee. He celebrated Tuesday night at his home with a group of about 40 friends and family, who shared his excitement.

Kent ran on a platform of “elevating community standards” and attracting more business and new residents to the township. He previously said he wants to work with the state, county, and other local officials to address the conditions of township roadways and also wants to work closely with school officials to build a “safer, more secure campus” for the community’s children.

LISBON — Second Harvest Food Bank of the Mahoning Valley is collaborating with Beaver Local Schools in ...

STRUTHERS — No actions were taken during the Struthers City Council meeting Wednesday, but reminders were ...

AUSTINTOWN — A man is facing charges after a woman reported hearing shots fired outside her 907 Compass West ...