A lot to be thankful for: Boardman family goes through cancer battle 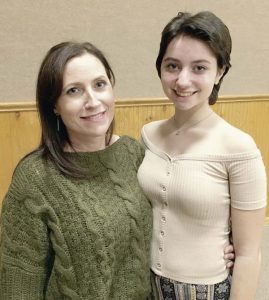 Staff photo / Ed Runyan April Stanislaw and her daughter, Juliette Dietl, stand together at St. William Church in Champion for a recent fundraiser to help the family with expenses associated with Juliette's cancer diagnosis last year.

BOARDMAN — Thanksgiving week is living up to its name a lot better this year than last year for April Stanislaw of Boardman, her daughter Juliette, and the rest of the family.

It was Thanksgiving week last year when April took Juliette, 14, to Akron Children’s Hospital in Boardman for a headache.

Hospital personnel did a CAT can. “It showed something was wrong,” Stanislaw said.

A short time later, Juliette was diagnosed with an aggressive form of brain cancer called a glioblastoma.

It is the most common and lethal brain tumor in adults but is rare in children. Arizona Sen. John McCain died of a glioblastoma in 2018.

Asked how it felt to learn her child had brain cancer, Stanislaw said: “You’re in shock, You’re angry.”

“She had a headache, you know?” Though the headache was worse than a normal one, the only other symptom was vomiting, Stanislaw said.

Right away, surgery was done to relieve the pressure on her brain. A short time later, Juliette, then 13, had surgery at the Children’s Hospital of Philadelphia to remove the tumor. Some of the best news the family got throughout the past year was when they learned doctors had removed all of the cancer.

Stanislaw and Juliette would spend most of the next three months at the Philadelphia hospital so that Juliette could receive protein radiation treatments. To help pay for the trip, the family created a GoFundMe page titled “Our Supergirl Jules (Juliette Dietl).” Twelve months of chemotherapy treatments that began after that will be complete this spring.

Among the things Stanislaw is grateful for is that the surgery did not cause other damage to her daughter’s brain.

“Fortunately, (the cancer) was not near any important areas of her brain, so she did not lose any of her motor skills or anything like that. We’re very lucky,” Stanislaw said.

At a recent fundraising dinner sponsored by Knights of Columbus Post 7491 at St. William Church in Champion, the bubbly and energetic Juliette showed that she is a normal and energetic teen, dancing with her sister to the song “New York, New York” and having a good time.

“Adults have a small chance of survival, but for kids, the percentage goes way up,” Stanislaw said of a glioblastoma.

Doctors diagnose about 14,000 glioblastomas per year, according to the Web MD web site. “It is usually very aggressive, which means it can grow fast and spread quickly,” the site says.

As for Juliette, the worst part of the year-long odyssey was the pain caused by the stitches in her head. She wore a helmet after surgery because a part of her skull was removed temporarily.

“She did so well because she is so strong,” Stanislaw said of Juliette. “She will have to be monitored for the rest of her life.”

“I have amazing friends and family,” Juliette said. “If I didn’t have that, I would have done worse.”

LISBON — Plastic face shields being made at the Columbiana County Career and Technical Center are among the ...

AUSTINTOWN -- The Austintown Local Schools Athletic Department is giving back to local restaurants with "Falcon ...

U.S. Sen. Sherrod Brown - who said a few months ago that he didn't see Joe Biden as the Democratic presidential ...

AUSTINTOWN -- Recycling bins at the 9/11 Memorial Park on Raccoon Road overflowed Sunday night with not only ...