Ryan runs out of money, drops bid for presidency

HOWLAND — Struggling to raise money and lagging in the polls, U.S. Rep. Tim Ryan decided to get out of the 2020 Democratic presidential race.

Ryan’s campaign hasn’t gained momentum since his April 4 announcement. After two poor fundraising quarters, he announced Thursday he was quitting the presidential campaign and will concentrate on winning his 10th two-year term in the U.S. House next year, representing the 13th District. Ryan, D-Howland, was running for both positions.

“We ran out of money,” Ryan said. “A lot of people, regardless of what you were doing, a lot of people weren’t going to give money unless you’re on the debate stage. It’s unfortunate. If they kept the process open, we would have kept that strategy of focusing on the early states. It didn’t work out that way.”

Ryan said money was needed “not just to survive. You need to actually have money to get on the ballot in all of the states and that’s a significant investment that we couldn’t make. You need people on the ground to get signatures and lawyers in each state. The costs of that was too much. It’s a barrier that starts to weed people out.”

Ryan said he would be interested in being a vice presidential running mate if offered the opportunity.

He also said he plans to endorse a candidate, but first “take a break to catch our breath and see how it goes. I want to shape the race the best I can. We need the right nominee to position us and give us the best chance to win.”

Ryan said he’s talking to different campaigns and he has preferred candidates, though he declined to name them.

In recent months, he’s been critical of the three frontrunners: ex-Vice President Joe Biden, U.S. Sen. Elizabeth Warren of Massachusetts and U.S. Sen. Bernie Sanders of Vermont. He recently said the latter two were “so far left” that neither could beat President Donald Trump, a Republican, and that Biden was “starting to struggle.”

The writing appeared on the wall when Ryan’s campaign filed a finance report Oct. 15 that showed he raised only $425,731.01 during the third quarter. It was the 17th lowest amount among 19 Democratic presidential candidates — and even less than two candidates who’d quit the race in August. It was also less than half of what he collected in the second quarter when he was again at the bottom of the money list of Democrats seeking that office.

Also, he’s failed to reach 1 percent in most national polls for months. He was polling around 1 percent shortly after he announced candidacy.

The poor fundraising and polling numbers kept Ryan off the debate stage Sept. 12 and Oct. 15, and with thresholds for future debates even greater, he wasn’t going to qualify for next month’s debate or any others after that.

Yet just a couple of weeks ago, Ryan discounted the importance of the debates and vowed to stay in the race until at least the end of February after the early-state primaries and caucuses in Iowa, New Hampshire, Nevada and South Carolina.

That changed with Thursday’s announcement.

“While it didn’t work out quite the way we planned, this voice will not be stifled,” he said. “I will continue to advocate and fight for the working people of this country — white, black, brown, men, women. There’s people who get up every day, take a shower after work sometimes, that are working really hard. And we’re going to continue to fight for making sure that those workers are treated fairly, and that they have access to good health care, that they have a solid pension to retire on.”

Ryan said he’s been thinking about getting out of the race for the past few days and decided to do it Thursday after first speaking with supporters.

Ohio Democratic Party Chairman David Pepper said, “Tim Ryan used his presidential campaign to lift up the voices of those who have been left behind,” and “we’re proud of the campaign he ran.”

Biden tweeted: “At a time when labor is under attack and Trump’s reckless trade wars threaten millions more farms and families around the country, Tim Ryan has been a clear voice for those at risk of being left behind. He’ll continue to be a fierce force for them in Congress.”

Warren tweeted: “Thank you Tim Ryan for helping ensure that American workers are a primary focus of this election. I’ll keep fighting alongside you to level the playing field for working families.”

Several other Democratic presidential candidates also tweeted thanks to Ryan for his campaign.

Larry Sabato, founder and director of the University of Virginia’s Center for Politics and publisher of the well-respected political website Sabato’s Crystal Ball, tweeted: “Well, I’ll admit I forgot he was still running.”

Several others joked on social media about Ryan’s candidacy, asking who he is.

Tim Murtaugh, Trump’s 2020 re-election campaign communication director, tweeted he was “tempted to make a joke about not knowing he was running, but I think it’s more important to point out that Tim Ryan was one of the Democrats who tried fruitlessly to find a moderate path to the Dem nomination. There isn’t one.”

Ryan’s congressional campaign fund has also struggled to raise money. He raised $42,883 during the third quarter and $30,255.83 during the second quarter. Those are the lowest amounts of any incumbent member of Congress in Ohio in both quarters and among Ryan’s lowest since he first ran for the office in 2002.

Ryan said whatever money he has left in his presidential account will be transferred to his congressional fund.

There are three announced Republicans seeking to challenge Ryan next year for Congress. None have filed campaign finance reports with the Federal Election Commission and don’t have to until they raise or spend at least $5,000. The candidates are Duane Hennen of Warren, Robert Santos of Austintown and Lou Lyras of Campbell.

YOUNGSTOWN - Country superstar Luke Bryan will be the headliner for the 2020 Y Live concert at Stambaugh Stadium on ...

LORDSTOWN — General Motors is giving the public the opportunity to engage on a proposed multibillion ... 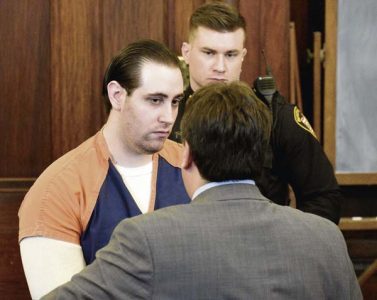 BOARDMAN — Officers responded to the Family Dollar store on South Avenue Tuesday morning after report of an ...

Panel talks about library’s near future

CANFIELD — Renovations — and how they’ll be paid for — were on everyone’s mind during a committee ...