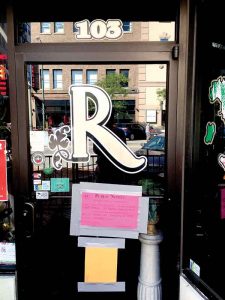 Roberto’s Italian Ristorante at 103 W. Federal St., Youngstown, is behind on its state sales tax and has been shut down by the Ohio Department of Taxation for a second time. The restaurant has been closed since Friday. Staff photo / Ed Runyan

YOUNGSTOWN — Roberto’s Italian Ristorante has once again been shut down by the Ohio Department of Taxation for failing to pay sales tax.

A pink slip is posted outside the restaurant at 103 W. Federal St. It is behind on its sales tax, said Gary Gudmundson, a department spokesman.

“There are multiple months of outstanding taxes” owed, he said. “That business can no longer do retail business until it pays all of its delinquent sales tax. We can suspend a vendor’s license if they fail to report and pay two consecutive months or three months over a 12-month period.”

Gudmundson said he couldn’t disclose how much money Roberto’s owes the state.

The owners of the restaurant couldn’t be reached for comment Tuesday.

The restaurant has been closed since Friday.

The state shut down Roberto’s in January for failing to pay state sales tax.

Because of that, Roberto’s was put into the department’s “habitual offenders program, he said.

“To qualify means you violated the law regarding filing and paying sales tax before,” Gudmundson said. “The businesses in that program tend to get greater scrutiny than first-time offenders. This business is in that program and was notified in August it needed to come into compliance and has yet to do so. They can go back in business once they pay their outstanding tax.”

The Italian restaurant opened in 2012.