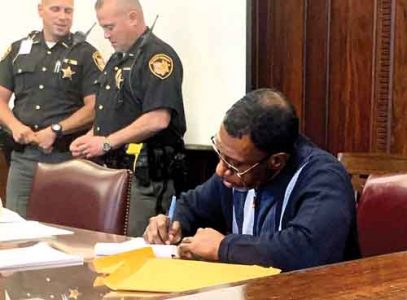 YOUNGSTOWN — A Mahoning County jury viewed a video Wednesday that showed a murder defendant punching his wife less than 48 hours before the woman died of severe brain injuries.

Prosecutors showed the security video from outside of Topsy’s Lounge, 1375 Logan Ave. on the North Side, as jurors viewed the confrontation between Jason and Ryan Hymes the night of Feb. 13.

Jason Hymes Sr., 47, is on trial on charges of murder, two counts of felonious assault and one count of domestic violence in the Common Pleas courtroom of Judge Anthony D’Apolito.

D’Apolito told the jury of six women and six men that they will probably get the case by this afternoon. It is not known if Hymes’ attorney, James Wise, will present any defense witnesses this morning.

Prosecutors rested their case Wednesday afternoon after calling detective Sgt. Anthony Vitullo, who obtained the bar’s surveillance video that showed the confrontation. During the video, several members of the victim’s family became emotional and had to be escorted out of the courtroom.

Vitullo described the video showing Hymes and his wife getting into a pickup truck parked just outside the bar. A few seconds later, jurors then saw the truck lurch and the woman kicking open the door.

Vitullo said he believed the video showed Hymes punching his wife at least twice, breaking her nose, and then pushing her in an attempt to keep her from getting out of the truck.

“I would say by what is shown on the video, that’s an assault,” Vitullo told assistan4t prosecutor Jennifer McLaughlin.

Under cross examination by Wise, Vitullo said three police officers were called to the Hymes’ Alameda Avenue home after the bar fight. They talked to the woman and left, the detective testified.

The next morning, Ryan Hymes was taken to St. Elizabeth Youngstown Hospital with severe head injuries. She died Feb. 15.

Vitullo said Hymes under questioning had said his wife was injured in a fall at the home caused by a seizure. The detective said the defendant later changed his story, admitting to hitting his wife twice.

Hymes was arrested on assault charges after being interviewed the morning of Feb. 14. He was indicted March 21 by a grand jury on the murder charge as well as other felonies.

The defendant is currently serving a two-year sentence at Lake Erie Correctional Institution on a weapons conviction. He entered prison May 13, records show.

Bartholow said the woman died from blunt-force injuries to the head and ruled the case a homicide. The doctor described the bleeding and swelling in the brain as well as the many bruises on the woman’s body, which were depicted in 21 autopsy photos shown to the jury.

“I saw a brain with a lot of trauma, a lot of injury to it,” Bartholow told assistant prosecutor Steven V. Yacovone.

During the showing of the photos, the defendant rocked in his chair and wiped away a tear.

Also taking the stand Wednesday was Dr. Chander Kohli, who had treated the victim at the hospital. Kohli described the woman’s injuries and the severe blood loss.