Tue. 2:26 p.m.: US steps up anti-Iran campaign ahead of UN General Assembly 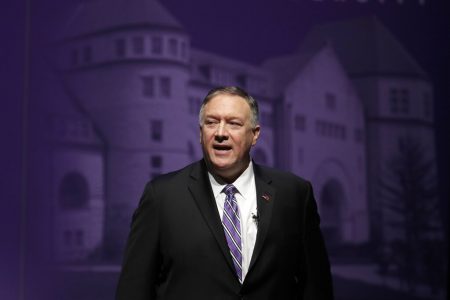 Secretary of State Mike Pompeo answers a question from an audience member after giving a speech at the London Lecture series at Kansas State University Friday in Manhattan, Kan. (AP Photo/Charlie Riedel)

WASHINGTON (AP) — The Trump administration is stepping up its campaign to get other nations to boost pressure on Iran as world leaders prepare to meet at the United Nations this month. Even as President Donald Trump dismissed his hawkish national security adviser John Bolton, the administration pressed ahead with accusations of Iranian untrustworthiness and deceit.

The administration says the world should take action on Iran’s non-compliance with the 2015 nuclear deal amid new questions about Iranian activities raised by the U.N. atomic watchdog. The U.S. has been ratcheting up its own sanctions on Iran since Trump withdrew from the nuclear deal last year.

Secretary of State Mike Pompeo said today that Iran is trying to deceive the world by refusing to fully cooperate with the International Atomic Energy Agency. The effort comes two weeks before the annual U.N. General Assembly session at which Iran is expected to be a major agenda item amid efforts by France to convince Trump to meet Iranian leaders.

“The Iranian regime’s lack of full cooperation with (the IAEA) raises questions about possible undeclared nuclear material or activities,” Pompeo said in a tweet. “This fits into Iran’s 40-year pattern of lies. The world won’t fall for it. We will deny the regime all paths to a nuclear weapon.”

“Now that we’re two weeks from UNGA, you can be sure Iran is working overtime on deception,” he said.

The comments were prompted by a meeting of the IAEA Board of Governors on Monday at which the agency’s Acting Director General Cornel Feruta said he had told Iranian officials of the importance of “full and timely” cooperation with it on a visit to Tehran. That visit came after IAEA inspectors reportedly found traces of nuclear material at a warehouse identified by Israeli intelligence as an undeclared nuclear facility.

“I also stressed the need for Iran to respond promptly to agency questions related to the completeness of Iran’s safeguards declarations,” Feruta said.