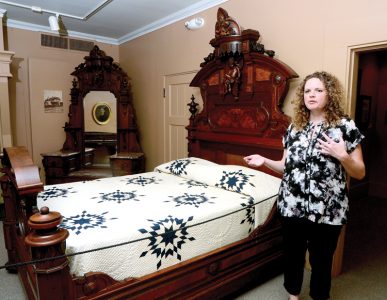 YOUNGSTOWN — If you want to learn more about the Mahoning Valley’s early days, a wealth of information is easily accessible — some of which can be found in two adjoining rooms.

“His father came from Connecticut in 1800. He began his family in Brier Hill shortly after he arrived in the Mahoning Valley,” Jessica D. Trickett said about David Tod and his father, George Tod.

The elder Tod was an Ohio Supreme Court judge who also was elected to the state Senate in 1804 to represent Trumbull County — one year after Ohio became a state.

Trickett, collections manager for the Mahoning Valley Historical Society, spoke recently about “Tod Family Treasures: 19th Century Heirlooms,” an exhibit the MVHS began showcasing Aug. 23 on the second floor of the Arms Family Museum, 648 Wick Ave., that will run through at least late 2020.

The exhibit features decorative arts, portraits, writings and other artifacts that provide glimpses into one of the Valley’s most influential families. It also focuses on David Tod, the fourth of George and Sallie Tod’s seven children who spent much of his life in politics as well as a businessman and industrialist.

Perhaps the most prominent piece is a bedroom suite consisting of a bed and dressing table the Tod family bought, probably in the 1870s, from the A.S. Herenden Co., a Cleveland furniture business. Charles and Penelope Curry, who live in the Minneapolis area and own the set, contacted the MVHS about the furnishings and donated them to the Historical Society’s collection, Trickett noted.

“They knew its history, and that it has been passed down through their family,” she said about the couple, adding that the set had changed hands several times over the years.

The two pieces were handmade in a style that captures the Renaissance Revival period, a time of 19th century architectural influences, she continued.

“They’re ornate, highly decorated and carved,” she said about the set, which consists of delicate carvings of Cupid designs complemented with curved pinnacles and winged cherubs carved into the headboards.

Also on display is a piano that belonged to David Tod when he lived on the family farm in Brier Hill, now the Tod Homestead Cemetery on Belmont Avenue. He later sold it to a Warren woman for $200 before her daughter donated it to the MVHS in the 1930s, Trickett explained, adding that its keys have a mother-of-pearl veneer.

The collaborative exhibit also had a large portrait of David Tod on loan from the Tod Homestead Cemetery Association, which is hung near a series of five small black-and-white photographs that show the family farm in the 1800s.

Inside one of two display cases are a variety of documents that include a medal embossed with his portrait, a family Bible and a letter David Tod wrote in 1847 to Dom Pedro II, who was the second and last monarch of Brazil. From 1847 to 1851, Tod served as U.S. ambassador to that country after President James K. Polk had appointed him.

The other contains a monogram, hand-painted china set with mint-green borders that bears the Tod name, as well as a four-piece beverage set made about 1850. A few plates, a pitcher and a boat-shaped saucer typically used to hold gravy complete the collection.

The family artifacts also feature a silver tray given to Tod while he was in Brazil, Trickett said.

After his single term as governor, President Abraham Lincoln offered to make Tod his treasury secretary, but he turned down the position, Trickett said.

“He declined due to his health and local business interests,” she added.