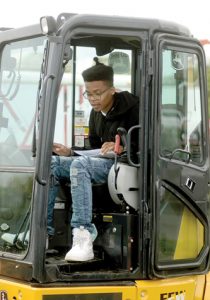 Staff photo / R. Michael Semple Thomas Barnes, 18, a senior at Struthers High School, inspects the interior of a mini-excavator Thursday at the Mahoning Valley Skilled Trades Expo at the Canfield Fairgrounds. The event for high school students had 4,100 from Trumbull, Mahoning and Columbiana counties and Lawrence and Mercer counties in Pennsylvania attend to connect with professionals about the skilled trades industry.

CANFIELD — Thomas Barnes willingly confessed some of his motive for attending the Mahoning Valley Skilled Trades Expo was to get out of school Thursday.

The other part was a sincere interest in working in the skilled trades industry should he decide not to immediately attend college after finishing high school in Struthers.

“If I don’t go to college I at least want to make enough money to go to college later in life,” said Barnes, 18, a senior, just after hopping off a mini-excavator.

He was among about 4,100 students from Trumbull, Mahoning and Columbiana counties and Lawrence and Mercer counties in Pennsylvania at the Canfield Fairgrounds to connect with professionals about entering the industry and get hands-on experience in the field.

This was the first local expo of its kind and with that many students, there were challenges, but overall the event went well, said Gary Hartman, services director with the Builders Association of Eastern Ohio and Western Pennsylvania.

“I like to think most of the kids got to see most everything, get a little emotion into the field and see what happens … something to spark their interest or spark the thought process,” Hartman said.

It was important for the students to attend the expo because the district doesn’t have a full-fledged industrial arts program, plus, he said, not all high school students are bound for college.

“They have been hearing college, college, college so much, they don’t know what’s out there,” said Hadi, who was on a dual mission of trying to find participants for a similar fair the school district wants to put on in the future.

Representatives from 16 trades were hand as well as some contractors and interactive and static displays with equipment. Information on how to apply for an apprenticeship was also available.

It was put on by the association, Western Reserve Building Trades, educational service centers in Trumbull, Mahoning and Columbiana counties and the Youngstown Warren Regional Chamber.

Soraeya Loveland, a junior at Warren G. Harding High School, saw how she could combine her love of art with the skilled trades into a career like finish carpentry.

“I’ve seen a lot of different trades and got to do hands-on like laying tiles, painting … it was fun, I enjoyed it a lot,” said Loveland, 16.

“It’s opening my eyes to what there is out there,” she said.

Some of his students, like Loveland, had their eyes opened to new possibilities, but others already have a focus on a trade. For two, a sophomore and senior, “we’re working on making it a seamless transition” into Plumbers and Pipefitters Local 396, he said.

Next year’s expo could be expanded to multiple days with an afternoon session for parents and adults interested in the skilled trades.

YOUNGSTOWN — Clark Greene Jr., 53, of Philadelphia, was sentenced to four years in prison Tuesday in Mahoning ...