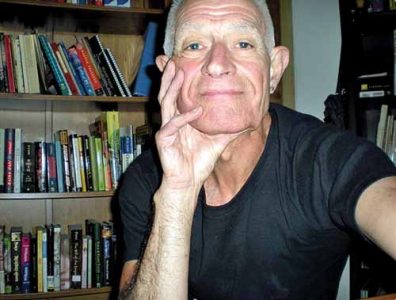 POLAND — Poland is not a town where you would expect to find dancing snakes, floating wizards, celestial guardians and a flute-playing fisherman’s son.

Yet within the Poland home of Anthony L. Manna you will find them all and many more magical creatures, as well.

Manna is an award-winning author of children’s books. His fables are based largely on Greek folk tales, and his newest book (to be published Tuesday by Mascot Books) is titled “Loukas and the Game of Chance.”

Illustrated by Donald Babisch, also of Poland, it is the story of Loukas who, while playing his flute at the village seawall one day, encounters a mysterious talking, dancing snake. Lured by Loukas’s spritely tune, the snake sways in harmony with its surging rhythms before slithering away, leaving behind in Loukas’s path three gold coins. This launches Loukas on a treacherous journey from fortune and favor, through greed, pride and loss, to ultimate redemption and restoration.

Manna’s own path to Poland began in North Orange, N.J., eight decades ago. As a Catholic school boy, he imagined himself in the priesthood.

“I studied to be a priest for about five years and wound up in a Trappist monastery,” Manna recalled. “It was either that or the army. I had been a disaster through high school, so the priesthood looked wonderful to me.”

Manna’s father wrote a sports column in the local Orange paper. “I remember the clicking of those typewriter keys. That was an inspiration to me — to observe the process of the product, how one thing moved into another.”

That process planted the seed of a future writer within Manna’s spirit.

His priestly ambition, however, was not meant to be, for during of the course of his education came love and marriage instead. Leaving the monastery behind, Manna’s academic journey took him first to Seton Hall University in New Jersey, then to the University of Iowa — where he earned his Ph.D. in literacy development — and finally to Kent State University, where he taught for 30 years.

Explaining the beginnings of his career as an author, Manna explained, “At Kent State, I collaborated on a couple of books with a few colleagues and started the Virginia Hamilton Conference on Multicultural Literature for Youth. It is now in its 35th year.” Virginia Hamilton was a celebrated African-American children’s book author from Ohio. who died in 2002.

“We took people’s speeches, presentation, illustrations and writings, reshaped them and edited them, and published them as books,” Manna said.

Through his work at Kent State with health educators, Manna began to see how literature could be one way to help kids heal. He collaborated with one of those health professors on his first textbook, “Children’s Literature for Health Awareness.”

In the ’90s, Manna discovered that Kent State University had a program called the Greek Exchange program.

“I was able to go to Greece on a scholarship from Kent State University.” Manna said. “With the grant to finance my travel and living expenses, I was able to study in Greece. It was supposed to be for a semester. But I stayed for two years from 1992 to 1994.”

It was during this period when Manna became enamored with Greek folk tales.

“I heard fantastic stories, very dark stories full of conflict. Ogres and demons. Deep, dark stuff. I decided to collaborate with my Greek colleagues to write books based on these tales.”

Manna established his Greek Folklore project to translate and reshape these stories.

“They’re mostly from the oral tradition and tend not to translate well to the page. They were also stories that few American children had ever heard.”

These were not Disney-like fairy tales with happy endings. These were stories of conflict and struggle, more in the Brothers Grimm tradition than Walt Disney.

Manna explained, “Folk tales come out of the folk, and the folk have a whole range of difficult experiences and conflicts to deal with. There are wars and power struggles between the rulers and the people, struggles for survival. Their folk tales are reflections of their lives and their cultures.”

It was during his tenure at Kent State that Manna published his first collection of 20 Greek folk tales, “A Treasury of Delights.”

Retiring after 30 years at Kent, Manna moved for a while to a remote 50-acre ranch in the Arizona desert. “My son and I purchased property in the desert very close to the Mexican border south of Tucson.”

His plan was to spend his winter months in Arizona and the rest of the year in Ohio. But after selling his home in Kent he had nowhere else to go, so he tried life in Arizona. After two neck surgeries, he said he realized there was no way he could stay there while using a walker and needing daily access to medical care.

“My illustrator, Don, and his brother had a log cabin here in Poland. They invited me to rent space from them, so in 2007, I moved here.”

“I participate in a writer’s group here — a group of authors who get together every two weeks. It’s quite a challenge to keep up with them,” he said.

“The Lit Fall Literary Festival is a great program. It is now in its third year and takes place on Oct. 4 and 5 at various locations in downtown Youngstown. They bring in people in from all over the country — poets, writers, illustrators, young adult writers and writers of every of kind.”

Manna’s devotion to children’s literature is striking given that he is now well into his 80s.

“I like going into schools when my books are published. It’s a picture book that appeals to children from kindergarten up. I’ll read to them and dramatize the story and ask them to participate with me.

What better way to retain the spirit of youth than to share it with youth?

“That’s the joy and the blessing of it as far as I’m concerned,” Manna said, smiling.