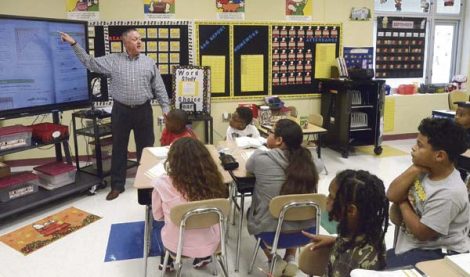 Most school districts in Trumbull and Mahoning counties earned either B or C grades on this year’s state report cards.

Only three districts — Liberty, Niles and Warren — earned Ds and one, Youngstown, earned its fourth overall F in four years. Youngstown’s performance will trigger a process to wipe clean the slate of current board of education members, a state lawmaker said.

The report cards released Thursday show ongoing improvement statewide, continuing the positive trend seen in recent years, according state officials. ” … across Ohio, we are getting better and better at challenging, preparing and empowering each child,” said Paolo DeMaria, superintendent of public instruction.

District grades are based on six categories: achievement on state tests, which represents 20 percent of the grade; progress based on past performance, 20 percent; gap closing, which shows how well students do in English language arts, math, graduation and language proficiency, 15 percent; graduation rates, 15 percent; improving at-risk K-3 readers, 15 percent; and prepared for success, which recognizes districts for having technical and special college bound programs, 15 percent.

Locally, none of the 36 school districts in Trumbull and Mahoning counties received an overall A grade.

Youngstown City Schools is one of four districts statewide that earned an F; the others are East Cleveland, Springfield in Clark County and Jefferson Township Local in Montgomery County.

Youngstown earned Fs in all but two categories. It earned a D in improving at-risk K-3rd grade readers, and a D in its graduation rate.

Because the Youngs-town district earned Fs in multiple years, it was taken over by the state. An academic distress commission is working to improve performance.

State Rep. Michele Lepore-Hagan, D-Youngstown, said the latest report card will trigger the removal of the school board members elected by city residents.

“Removing the duly elected school board members who have been totally marginalized since the Academic Distress Commission and appointed CEOs assumed control of the district certainly isn’t the solution to the problems that plague our school system,” Lepore-Hagan said. “Doing away with HB 70 and restoring local control is.”

The state superintendent must convene a nominating panel within 30 days if the system under the commission’s control does not receive an overall grade of C or higher after four years, according to House Bill 70.

The panel will nominate 10 candidates for appointment to the district’s board. Youngstown Mayor Jamael Tito Brown will select five members from among those candidates. They will replace the existing elected board members on Jan. 1.

“The answer isn’t a top-down dictatorial system that cuts out the community …,” Lepore-Hagan said. “We must repeal HB 70. The Senate should take up and pass HB 154 as quickly as possible.”

House Bill 154 is a bipartisan bill that seeks to end state takeovers of Ohio schools and restore local control to education officials.

Youngstown schools CEO Justin Jennings was assigned by the distress commission and he began working this summer, replacing Krish Mohip. He believes the district is moving in the right direction.

“We have great teachers, great administrators and we’re going to keep moving forward with helping our scholars,” Jennings said.

The district is placing a lot of emphasis on literacy.

“It will not only be on the district level, but in every school building and every classroom,” he said.

Warren schools Superintendent Steve Chiaro said although the district’s overall D grade has not changed from the last report card, its school improvement strategies have produced gains in areas of focus. The district received Ds in achievement, progress, and gap closing, an F in prepared for success and Cs in improving at-risk K-3 readers and graduation rate.

“Our four-year graduation rate has improved, and at 87.8 percent is 2.5 percent higher than the state average,” Chiaro said. “Last year, we were in the lower 80s.”

“We’re very pleased with the improvements we’ve made,” Chiaro said. “We’re not satisfied with where we’re at with our letter grade, being one of the 122 districts across the state that has a letter grade of D overall. That’s not something we’re proud of. Our focus is to be a C or higher.”

Girard Superintendent Bryan O’Hara, who began his new job earlier this year, said the district’s overall B grade is something that’s expected by parents and administrators. It received As in progress , gap closing, graduation rate and improving at-risk K-3 readers. Its only C was in achievement, but it received an F for prepared for success.

“We will be looking at what we are offering in our buildings and through the career tech center,” he said. “There is also a strong effort to increase the number of recipients for the honors program. We’ve added ACT preparation programs. These should help the prepared for success grade,” he said.

Boardman’s district grade of C is the same as last year, but Superintendent Tim Saxton said the district has made improvements. Most significantly, its progress grade improved from a D last year to a C this year.

It also received Cs in achievement and in improving at-risk K-3 grade readers. It has As in gap closing and its graduation rate. It received a D in prepared for success.

“The district has been able to improve the progress grade because we aligned our curriculum throughout our elementary school building,” Saxton said.

As far as the Prepared of Success grade, Saxton admits he does not understand the grade.

“We’ve been honored for our advanced placement program and we’re a Blue Ribbon school,” he said. “We have some of the top-performing advanced placement scholars in the state. Prepared for Success can be misleading, but it is a category we are judged by, so we will do what we can to make improvements.”

Canfield Local Schools Superintendent Alex Geordon is pleased with the district’s B grade, but argues it can do much better.

The district earned A grades in gap closing and its graduation rate, Bs in student achievement and progress, and Cs in improving at risk K-3 readers and prepared for success.

“There are areas that we’re pleased, but there are areas that we trying to improve,” Geordon said. “We are especially proud that students with disabilities’ scores are up. It shows we are not only focusing on students taking advanced classes, but also those that may be having more problems with academics.”

Geordon says the state report card is only one tool that parents should use to judge the success of a school district.

“It is a snapshot of what a school system does,” Geordon said. “We make a big deal of it. We are judged by it, but ultimately a district is judged by students who leave it and become functioning and successful people.”

Niles earned an overall D grade. It earned C grades in gap closing, graduation rate and improving at-risk K-3 readers, Ds for achievement and progress and an F for prepared for success.

High school graduation rates improved from a D to a C over the last year, Superintendent Ann Marie Thigpen said. The district has put a lot of effort in improving literacy over the last four years, she noted.

“Through those efforts and the professional development our teachers are receiving through our Striving Readers grant, we have been able to maintain a C for improving our at-risk K-3 readers,” she said.

Lordstown Superintendent Terry Armstrong emphasized that although the district’s overall letter grade of C remains the same, there are several areas for which the district is particularly proud.

It earned its lowest score, D, on preparing students in technical fields and preparing them for college.

“The district did exceed the state average on the test score components of the report card in 20 of the 21 areas tested,” Armstrong said. “We are excited that our first K-3 Literacy grade is a B meaning that our students are meeting goals and showing improvement.”

McDonald Local earned Bs in achievement, progress and closing the gap. With 95.2 percent of its students graduating in four years and 100 percent graduating in five years, the district graduation rate earned an A grade. It received a B rating for helping at-risk K-3rd grade readers and it received a D grade in preparing students in technical fields and college preparation.

Superintendent Kevin O’Connell credits the district’s teachers and principals in setting a level of quality and rigor for students to achieve.

“We’ve seen some improvement in each of the last three years,” O’Connell said. “Our staff has done a great job of analyzing the data to find ways to better help students understand their subjects.

“Classes are more rigorous,” he said. “We are moving in the right direction, but we cannot become too comfortable. We are constantly looking at both the weaknesses and the strengths that can be seen from these types of assessments.”