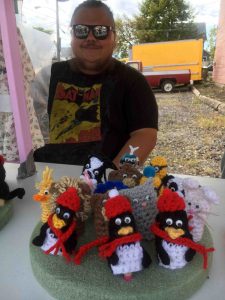 Correspondent photo / Sean Barron Sam Bowlin sells a variety of hand puppets and other items his mother, Jackie Bowlin, crocheted. He was one of about 20 vendors who were part of Saturday’s fifth annual Mahoning Avenue Fall Fest.

YOUNGSTOWN — Extracting a sufficient supply of sap from a tree to make maple syrup is a laborious process, but John Slanina will tell you that it’s sometimes a labor of love.

The arduous effort also can be symbolic for unifying people and building tighter bonds with neighbors.

“Every year in February and March, the neighbors make maple syrup. They collect sap from the trees, and we have a sugar house to make the maple syrup,” explained Slanina, president of the Rocky Ridge Neighborhood Association, based on the West Side.

Slanina estimated that it takes about 50 gallons of sap to produce one gallon of maple syrup. Nevertheless, the six-year undertaking has paid dividends — to the tune of more than $20,000 the association has donated, said Slanina, who also took part in the fifth annual Mahoning Avenue Fall Fest on Saturday.

An estimated 20 vendors were set up on both sides of Mahoning Avenue for several blocks roughly between McKinley Avenue and Steel Street on the West Side.

The fest’s main thrust was to highlight the corridor’s offerings and serve as a vehicle to bring neighbors together and showcase their talents, noted Councilman Mike Ray, D-4th Ward, who spearheaded the event.

That portion of Mahoning Avenue is in the 4th Ward.

Many people in the neighborhood association’s area come together after work to collect the sap, then filter and bottle the syrup in the small building off McCollum Road, Slanina said.

Proceeds have been used to help build the Michael Kusalaba branch of the Public Library of Youngstown and Mahoning County. In addition, the money has gone to the Mill Creek Park Junior Little League, the new state-of-the-art playground in the park’s James L. Wick Recreation Area and a Mill Creek Park Foundation endowment fund, said Slanina, who was helping to sell the maple syrup at the fall fest for $15 a bottle.

“Through this project, we’ve met neighbors and become friends,” he continued. “Everyone’s an ambassador.”

Many people who live nearby also met or reacquainted themselves with neighbors Terry Hassay and his roommate, Melody Titus, who were conducting a garage sale in the front yard of their Mahoning Avenue home.

“We have everything — an air-conditioning unit, go-carts, fire pits and all kinds of good stuff here,” Hassay said.

In addition, he had on hand old photographs of the two-story building next door to his residence in which his late grandfather, Herbert Jonas, had owned a photography studio for nearly 40 years. Another similar photo shows President Franklin D. Roosevelt during a campaign stop in front of the studio.

Other merchandise included jewelry that belonged to Titus’ mother, a wrought-iron set of two chairs and a table painted turquoise blue and wind chimes made from wine bottles for $20 each.

Also for sale was an old poster on which was an advertisement for the opening of Craig Beach Park, likely in the 1920s. It shows a 16-year-old girl who had been shot from a cannon and supposedly was suspended 5,000 feet up from a hot-air balloon as part of that day’s festivities.

Considerably closer to the ground was Sam Bowlin of Youngstown, who was selling finger puppets, colorful mushroom-shaped items, catnip toys and butterfly magnets his mother, Jackie Bowlin, had crocheted.

“She’s the brains of the organization. I’m like her chauffer,” he said with laughter.

Bowlin also had for sale clothing his mother had made for a series of dolls.

A nearby table that was part of a farmers market showcased the work of Pat McCamy, a local artist, photographer and animal-rights advocate who is donating 20 percent of her profits to local animal shelters.

Next to McCamy were Daniel Rauschenbach and his wife, Emily, artists who were selling their brand of leather bracelets as well as ceramic, pottery and clay pieces.

Mahoning Avenue businesses that contributed to the family-friendly fest were Kelly’s Bar & Grille, Casa Ramirez Mexican Restaurant and the Paisley House, which was hosting a trash-and-treasure sale, Slanina said.