Journey of a ‘Jesus freak’ 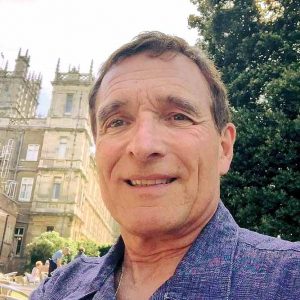 Submitted photo Dr. Charles B. Puskas’ life journey took him from a communal house in Youngstown to a barn in Newton Falls to teach biblical studies and theology at Midwestern universities and to publish several acclaimed books delving into the Bible.

YOUNGSTOWN — On the evening of Oct. 4, 1974, two young Clifton Road roommates went out searching for adventure. They had heard of a mysterious gathering place in Newton Falls called The Barn, where “Jesus Freaks” were getting saved.

Dr. Charles B. Puskas, known as “Chuck,” said he had already felt “touched by the spirit” at an Austintown Presbyterian Church service. He wanted to learn more. He talked his roommate into joining him that night at The Barn.

What they really wanted to do was get stoned, listen to the music and have a good laugh. Instead, they committed their lives to Christ that night.

Born on Nov. 3, 1951, in Youngstown, Chuck this summer capped a successful career as a nationally known Christian pastor, educator and author by returning to Youngstown for his Chaney High School class reunion. In his pocket, he carried a vintage Hohner blues harp.

“Growing up on the west side of Youngstown, in the ’50s and ’60s, music was a major part our lives,” Puskas said. “I started playing guitar and harmonica myself soon after seeing The Beatles on Ed Sullivan.”

The house on Clifton Road was a band house — a gathering place for local musicians and roadies. Despite their long hair and the rock music blaring from their windows, Puskas said he and the rest of the residents enjoyed an easy peace with the neighborhood.

“The police once brought a runaway kid to our house because they’d been called to a crime scene. They didn’t want the kid in the car. So we took care of him for the police while they took care of the crime. That’s the kind of trust we enjoyed in our neighborhood,” he said.

As a 17-year-old in August 1969, Puskas was immortalized on the cover of Life Magazine’s Woodstock Festival issue. He’s in the middle of the shot, catching a can of beer thrown from the stage by Country Joe and the Fish.

Of that first visit to The Barn, Puskas remembers, “WHOT DJ Johnny Kay was there. Young people were everywhere. Somebody would sing a song, somebody else would stand up and testify, and Phil Keaggy closed the service with some of his early Christian songs.”

It was the beginning of what was called the New Birth Movement. Informal community worship centers like The Barn gave rise to countless nondenominational congregations across America. Stained-glass windows and gothic spires yielded to folding seats, preachers in ponytails, and a thriving contemporary Christian music industry.

“We used to sit together in big circles down in Mill Creek Park, singing folk songs together. The Barn was like that. It was a more personable religious setting than I had ever experienced in my own Protestant tradition.”

Puskas counts Keaggy as a dear friend and as one of his earliest inspirations. As the leader of the Youngstown-based rock band Glass Harp, Keaggy led the group, over the course of three albums, into the Christian realm. Leaving the band around 1972, Keaggy retreated to a Christian commune in New York, emerging two years later with the single, “Love Broke Through.”

As Keaggy was re-emerging, Puskas said he was serving the Lord’s calling in his own way.

While a student at Youngstown State University, Puskas set out to stage a Christian youth rally on the campus — the Eternal Peace Rally. He reached out to his fellow worshipers at The Barn for donations to fund the rally.

“A little old farmer came up to me and handed me $200 cash for posters and full-page ads in the local papers,” he said. “That went a long way toward making the rally happen.”

After two years at YSU, Puskas transferred to a small Christian college in Springfield, Mo. — Central College, now Evangel University — where he received his bachelor’s degree. Next, he enrolled in Wheaton College in Wheaton, Ill., for his Master of Arts in theological studies, then finally earned his Ph.D. in Biblical languages at St. Louis University. He lists as his languages of study Hellenistic Greek, Classical Hebrew, Biblical Aramaic, Augustna / Ciceronian Latin, Sahidic Coptic, modern German and contemporary French.

In 1972, he married Susan Best of Hubbard, who was then working on a medical technology degree. They are still happily married after 47 years. They have two grown children, Rita and Bart.

His journey moved from student, to pastor and college teacher, to editor and published author.

“For eight years, I served as a college teacher and parish pastor before launching this literary career as proofreader for academic publications,” Puskas said.

Five highly acclaimed books later, with one forthcoming, Puskas enjoys widespread respect as a Christian scholar and theologian. He recently served as a lecturer at the University of Minnesota, Minneapolis.

Home for his class reunion, he said, “I am proud of Youngstown heritage. Today, when I give my testimony of faith, I always talk about the old days back in Youngstown.”

“We who grew up in the city retain our pride throughout our lives. There is no other city in America quite like it.”