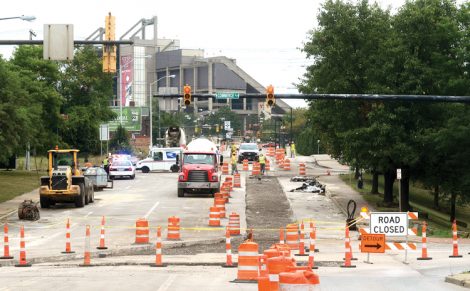 Construction on Fifth Avenue in Youngstown for a waterline replacement has made navigation tricky for motorists and pedestrians, and put some stress on nearby businesses. But the city’s water commissioner says work is wrapping up — that is, until another project starts in the area in spring 2020. Staff photo / R. Michael Semple

YOUNGSTOWN — Replacement of 3,300 feet of 16-inch waterline under Fifth Avenue has proved a temporary inconvenience for Youngstown State University students and nearby businesses, but city officials expect the more than $1.5 million project to be finished before month’s end.

Marucci and Gaffney also did the $4.8 million Wick Avenue improvement project on the other side of campus that occurred over a two-year period.

The Fifth Avenue waterline replacement project began in May, according to Johnson. It begins at the bridge on Madison Avenue Expressway and extends to Federal Street in the center of downtown.

It has some critics.

“As a business owner, the project has been a disaster,” said Basem Alamishat, owner of the Sunoco Gas Station at 590 Fifth Ave. “However, the crews have been working hard and have worked to keep lanes open.”

Alamishat said some of his longtime customers have made efforts to continue supporting the gas station and convenience store, so that has helped his business. He added, however, some people began traveling on Wick Avenue and taking other routes to avoid the road work.

“By the time this is done, I think it will be a good thing for YSU and, hopefully, businesses on the corridor,” he said.

Danny O’Connell, the university’s director of support services, said the construction work began after spring semester ended, so did not have a significant effect on students until mid-August when the university’s fall semester began.

“Before school began, we began warning students to get on campus early,” O’Connell said. “We’ve seen more students parking on the east end of the campus in the parking lots on Wick Avenue. The parking garage on Wick Avenue has more than 2,200 spaces.”

O’Connell, whose department gives parking permits, said YSU is fortunate that no matter where students eventually park their vehicles, they will be very close to the main campus.

O’Connell said his discussions with Marucci and Gaffney lead him to believe that Fifth Avenue north of Rayen Avenue could be opened imminently. The area south of Rayen will take several more weeks.

“We’ve kept all of the parking lots open throughout the construction,” O’Connell said.

YSU spokesman Ron Cole said the work on Fifth caused some disruption as fall classes began, but all of the parking lots surrounding the school remained open.

“We’ve communicated consistently with students to take extra precautions with both driving along and walking across Fifth,” Cole said.

Student Todd Brothers, 21, a center on the YSU football team, said the construction project has not affected his stay at YSU, but it has been annoying.

“The timing is not ideal … right at the beginning of fall semester,” Brothers said. “They say it will be done soon, but I’ll believe it when I see it.”

Chris Perry, a YSU senior, was expecting the traffic delays to be a lot worse than they have been.

“We’ve been able to travel on it pretty easily,” Perry said. “There could have been better directional signage, but it hasn’t been that bad. It is just life.”

Fifth Avenue was not closed, but there were various lane restrictions and detours. Most of the the work was done during the summer.

The project replaces a waterline that is more than 100 years old.

The waterline replacement is being paid for with funds from the city’s water department. It did not receive any grants.

“This was not done because of the number of breaks that occurred on this line,” Johnson said.

Cole said the work on Fifth is a precursor to a bigger project that is expected to begin in 2020 and take several years to complete.

Over a three-year period, starting in spring 2020, work will be done to Fifth, Park and Rayen avenues as well as Commerce, Federal, Front and Phelps streets, said Charles Shasho, the city’s deputy director of public works. The projects include repaving, reducing lanes on some of the streets, multi-use paths, new and repaired sidewalks, improved lighting, new traffic signals, landscaping and at its conclusion an autonomous bus service.

The work is being paid for with a $10.85 million federal BUILD (Better Utilizing Investments to Leverage Development) grant for its SMART2 Network (Strategic and Sustainable, Medical and Manufacturing, Academic and Arts, Residential and Recreational, and Technology and Training). Money also will be obtained from other federal and state funds as well as money and in-kind services from the city, YSU, Mercy Health-Youngstown and the Western Reserve Transit Authority

Construction will start in spring 2020 on the first project: a $5 million to $6 million improvement to Fifth Avenue between West Federal Street and eastbound Service Road.

“We had major construction on Wick Avenue a couple years ago that caused some headaches, but everyone adjusted pretty well,” Cole said. “And the result was a beautiful avenue leading into and through campus.”