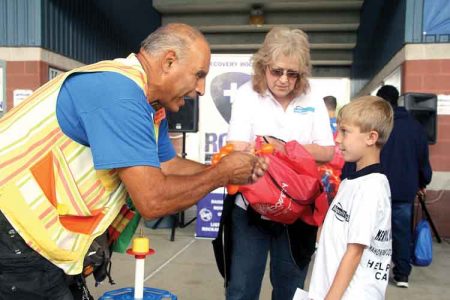 Staff photo / Allie Vugrincic George Caban, “the funny balloon guy,” left, makes a lion balloon animal for Logan Grizinski, 8, of Lowellville, while his great-aunt Rose Pitzulo of Poland looks on, during the ASAP Rally for Recovery Saturday at Eastwood Field.

NILES ä For Nikki Lowe of Niles, the ASAP Rally for Recovery Saturday at Eastwood Field was about carrying the message that there is life beyond addiction.

Lowe said she was addicted to opiates for several years, and in 2018 lost her fiancee, Mandy, to a heroin overdose.

âIáve been falling but Iáve been picking myself back up,ã Lowe said. She said the the Alliance for Substance Abuse and Prevention, or ASAP, rally was a great way to create awareness of the recovery community and to showcase resources available to addicts and their families.

âSeptember is National Substance Abuse Month,ã said Lauren Thorp, ASAP Project director and director of recovery at the Trumbull County Board of Mental Health and Recovery. She said the free ASAP rally creates a space for people in recovery and their families to celebrate the progress theyáve made.

For Lowe, Saturday marked the progress of two months clean.

âI work on 24 hours at a time,ã Lowe said. âEvery day I try to make a difference for someone else.ã

Lowe encourages others who are struggling with addiction to find a recovery program. A member of Alcoholics Anonymous, Lowe said the program isnát for people who need it, but for those who truly want to make a recovery.

Lowe said she was on the fifth recovery step ä confession ä which is why she wanted to share her story.

Lowe said she took opiates to get away from herself, but now sheás learning to be OK with herself and to find a relationship with her own god.

The ASAP rally, now in its seventh year, drew local recovery groups, members of which could be heard saying they were having fun sober for the first time in a while.

The event was designed to be family-friendly, said Throp, and included a photo booth, Recovery Radio, corn hole and several balloon artists.

Throp said the family aspect is important, because children see addiction and associate its negative affects with family members who struggle with it.

âWe want them to have a different experience and also show children recovery is possible,ã said Throp.

More than 40 vendors were at the rally, as well as around 600 health and addiction specialists, people in recovery, families, and community supporters. The event culminated in a one-mile âRecovery Walk.ã

Lowe attend the rally wearing a shirt memorializing her fiancee, which came with a message.