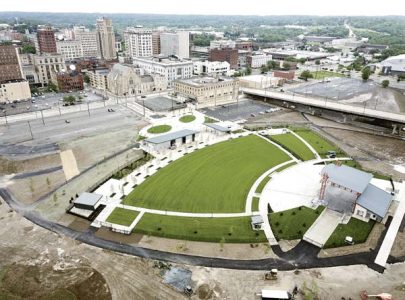 The Youngstown Foundation Amphitheatre opened in June while the Raymond John Wean Foundation Park will be ready in a few months. The amphitheater / park project’s final cost is about $8 million. Correspondent photo / Bob Jadloski

YOUNGSTOWN — The city’s board of control approved the final change orders for the downtown amphitheater / park project that puts the cost $6,589.51 over the original contract amount.

The project’s final cost is $8,013,310 after the board Thursday authorized additional expenses from Brock Builders Inc., the North Lima company that served as the general contractor.

“A project this size can have tens of thousands of dollars in change orders,” said Charles Shasho, the city’s deputy director of public works. “The change orders on this project were minimal and difference is impressive.”

Until the final change orders of $62,261, the project was actually under the original contract figure.

Among the change orders approved Thursday were $11,758 to cap dirt used for grading, $8,812 to install park benches, $7,706 to remove concrete from underneath a parking area to install lights, and $7,293 for electrical upgrades to one of the food buildings.

The Youngstown Foundation Amphitheatre opened in June, while the Raymond John Wean Foundation Park will be ready in a few months.

The city borrowed $4 million from the U.S. Department of Housing and Urban Development and received the rest of the money from the sale of naming rights to build the facility along the Mahoning River.

The complex is on property that included the former Wean United building, which was demolished in 2014.

Also Thursday, the board finalized a development agreement with the Rescue Mission of the Mahoning Valley to have the organization purchase 27 parcels on Martin Luther King Jr. Boulevard for $6,480 for its new location on the city’s North Side. It’s north of the rescue mission’s current building at 962 Martin Luther King Jr. Blvd.

The agreement states the rescue mission is building a 47,500-square-foot facility at a cost of about $5 million. Construction is expected to start shortly and be done by September 2020, according to the agreement.

Also, the rescue mission will work to find a buyer for its current location, and if it can’t, it agreed to demolish the 89-year-old building, which originally was a YMCA.

The mission provides food, shelter and counseling to those in need. It’s normal overnight capacity is 168 people with an emergency capacity of 198 with the addition of 30 cots and sleeping bags.

Convicted ex-commissioner tells his side in book

COLUMBIANA — The Columbiana Police Department is one of the eight Pittsburgh-area departments to receive a ...

Convicted ex-commissioner tells his side in book