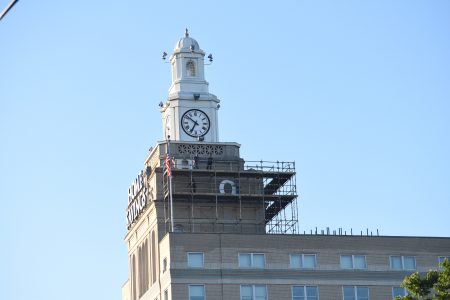 The sign will be replaced with a “P” as part of its rebranding effort as Premier Bank.

The new name is part of a merger with First Federal Bank of the Midwest in Defiance. Integration of the two bank systems affects about 78 branches which are adopting the Premier Bank name and branding platform. Officials have said the transition is expected to be complete by mid July.

The Premier Bank wordmark includes a “P” monogram that resembles a map location pin and emphasizes connectedness with people and our local communities, according to a release from both banks.

“The Premier Bank name and brand tells the story of two financial institutions coming together and most importantly the people who make the bank what it is,” stated Gary M. Small, president of First Federal Bank and Home Savings Bank.

The merger, worth approximately $473 million, won regulatory approval in January. The new company is projected to have assets of about $6 billion and operations throughout Ohio, Michigan, Indiana, Pennsylvania and West Virginia.