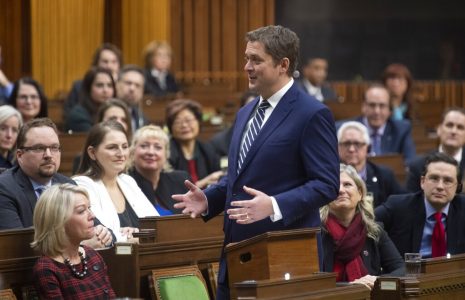 Leader of the Opposition Andrew Scheer turns and speaks to Conservative MP's as he announces he will step down as leader of the Conservatives Thursday in the House of Commons in Ottawa. (Adrian Wyld/The Canadian Press via AP)

TORONTO (AP) — Canada’s opposition Conservative leader said Thursday he will resign as party leader after weeks of infighting and a disappointing performance in parliamentary elections.

Andrew Scheer, 40, called resigning “one of the most difficult decisions I have ever made.” He will stay on until a new leader is elected.

“Serving as the leader of the party that I love so much has been the opportunity and the challenge of a lifetime,” Scheer said on the floor of Parliament.

Prime Minister Justin Trudeau won a second term in Canada’s October elections despite losing the majority in Parliament. It was an unexpectedly strong result for Trudeau following a series of scandals that had tarnished his image as a liberal icon.

The vote led several Conservative officials to call for Scheer to step aside.

Even members of his own party said Scheer is bland. They once touted it as a virtue, the antidote to Trudeau’s flash and star power. In the words of Canada’s former Conservative foreign minister, John Baird: “He’s not the sizzle, he’s the steak.”

But Scheer was criticized during the campaign for embellishing his resume by saying he had worked as an insurance broker when, in fact, he was never licensed.

He also took heat for holding dual U.S.-Canadian citizenship — something he and his party had blasted other Canadian political figures for and never mentioned until the Globe and Mail newspaper revealed it during the election campaign.

He stumbled at several points in the campaign. He was widely panned after a debate when Trudeau grilled Scheer about his stance on abortion and the Conservative refused to answer.

In 2005, he gave a speech in Parliament attacking same-sex marriage and his social conservative beliefs hurt him in Eastern Canada.

Following the resignation, Trudeau said in Parliament, “I want to thank him deeply for his service to Canada on behalf of all Canadians.”

Scheer plans to stay on as the member of Parliament for the Saskatchewan district he has represented since he was first elected in 2004 when he was 25. The Conservative caucus chair Tom Kmiec later announced Conservative Party Members of Parliament voted unanimously for Scheer to remain as leader until a new leader is elected.

He has spent most of his adult life in politics. At age 32 he became the youngest speaker of the House of Commons, a non-partisan role overseeing debate in Parliament.

Scheer became Conservative leader in 2017 after other prominent Conservatives decided not to run because they thought Trudeau could not be beaten in the 2019 election.

Nelson Wiseman, a political science professor at the University of Toronto, said leaders of the Liberal and Conservative parties are now expected to win at the first opportunity.

“If they don’t, the knives are out,” Wiseman said. “Scheer could see the writing on the wall; he would have almost certainly failed to win a majority at his party convention’s scheduled review of his leadership in April.”

Antonia Maioni, McGill University’s dean of arts, said Scheer’s party recognized that he and his social conservative beliefs were not a winning strategy for forming a government in Canada.

Dustin van Vugt, the executive director of the Conservative Party, issued a statement that appeared to dismiss suggestions the resignation could be tied to reports that party funds were used to subsidize private school education for Scheer’s five children.

“Shortly after Mr. Scheer was elected leader, we had a meeting where I made a standard offer to cover costs associated with moving his family from Regina to Ottawa. This includes a differential in schooling costs between Regina and Ottawa. All proper procedures were followed and signed off on by the appropriate people,” van Vugt said.