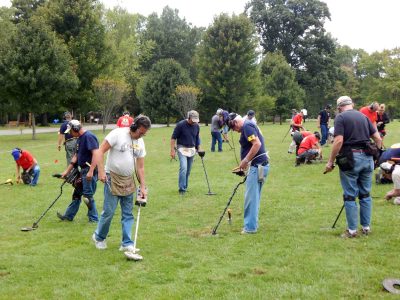 Staff photos / Bob Coupland Members of the Tri County Metal Detecting Club spend a day at Buhl Park in Sharon, Pa., looking for buried items in a practice search set up by the club.

AUSTINTOWN — Members of the Tri County Metal Detecting Club will head out throughout the summer months to different locations — including parks, fairgrounds and other sites — to put their metal-detecting devices to work.

The club — whose members are from northeast Ohio and western Pennsylvania — meets the third Tuesday of each month at the Austintown Senior Center. At these meetings, club members show what they found.

In September, the club met at Buhl Park in Sharon, Pa., spending the day on practice searches looking for marked coins.

Mike Marsh of Cortland said when they are permitted to search on someone’s private property, they will go to the door to let the property owner know they are there prior to doing their work. He said the members are always trying to look for different places to search and for different items.

Ray Borosko of Youngstown, club president, said they try to do as many outdoor events as they can during warm weather. He said many members are not only from the local area but Columbus, Cleveland, Akron and Canton.

Borosko said at Buhl Park, 50 members gathered in large fields to hunt for 24 painted pennies buried in the ground. There was also a second field where 75 pennies were buried.

“We like Buhl Park because there is lot of open space available for 40 to 50 people to be on a field at the same time.”

Borosko said many members are retired so they have time to spend going on the different hunts.

Jesse James of Cortland, past president, said members speak to other community groups, such as historical societies, about what it is like to have a metal detector and what they find.

“The summer we have the fun hunts. We go all over the place in Ohio and Pennsylvania. When it is bad weather, we have indoor programs at the Austintown Senior Center,” James said.

The club is planning special events for Thanksgiving and Christmas.

“We will hold family-oriented events to get the members and their families together for the holidays,” James said.

James said one-fourth of the club membership is women.

“We learn how to handle our machines. I have learned the best places to search are private property. We have been at state parks on the beach, but you can’t go into the grass,” James said.

James said it was his brother who got him interested in metal detecting.

“He has been using metal detectors longer than I have. He lives in Florida and because of the tourists, he finds a lot of items on the beaches,” James said.

Jim Blackburn of Cleveland drives to the Mahoning Valley to be part of the group.

“I have been using a metal detector for 53 years. I have been to England and found a gold Saxon pendant from the fourth or fifth century,” he said.

“We help locate bullets and other items. Each year, we find and return about 15 items to help local groups,” he said.

“It was fun. It is fun when families come here together,” said Dawn Borosko, whose husband got her interested.

Tom Cornelius of Brookfield said people bring items, such as coins and jewelry, to the meetings and place them on a large display board.

“Everyone can see what has been found and vote for their favorite item. It does not have to be the most valuable item, but often the most unusual,” Cornelius said.

Tim Becker of Kent said there are different skill levels according to the experience of each member.

JAZZ AND DESSERT FEST: The Fitch Alumni Jazz Band will host the fifth annual Jazz and Dessert Festival 6 to 8:30 ...

• AUSTINTOWN BOARD OF EDUCATION will hold an organizational meeting 3:30 p.m. today at the central office. A work ...

COFFEE AND CONVERSATION: Youngstown Councilwoman Anita Davis will hold a Coffee and Conversation 10 a.m. to noon ...