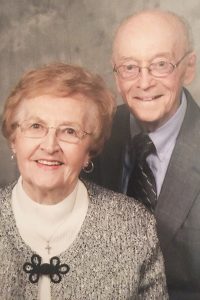 William K. and Joan C. McIntosh, residents of The Inn at Ironwood, a Briarfield assisted living community in Canfield, observed their 70th anniversary Jan. 10, 2020, and will celebrate with a family dinner later this month.

William and Joan attended Woodrow Wilson High School together, graduating in the classes of 1947 and 1949. They spent their first date ice skating at Lake Newport.

William and the former Joan Toman were married Jan. 10, 1950, in St. Dominic Catholic Church in Youngstown. They celebrated their honeymoon in Denver, where Bill was stationed at Lowery Air Force Base while in the U.S. Air Force.

Bill retired from Republic Steel after 30 years, and Joan retired as manager from The Youngstown Club.

They are members of St. Christine’s Catholic Church.

The couple hosted their family on Christmas Eve for the 68th year.