WARREN — One of the largest litigation threats that looms over jail operators is complaints about medical care the county-operated systems are required to provide for their inmates, a Mahoning County sheriff’s commander said.

The jails in Trumbull and Mahoning counties each pay for their medical programs differently, and so the way they handle medical litigation is different.

In Mahoning County, the county’s policies require the jail to put out a national request for proposals for companies that operate jail medical programs, said Cmdr. Kenneth Kountz of the Mahoning County Sheriff’s Office. The companies have to have experience providing medical care to inmates, Kountz said.

The system has been in place since the late 1990s and costs around $2 million per year for a facility that holds a daily average of 500 inmates, Kountz said. A Tennessee-based company, Wellpath, is the county’s all-inclusive provider, meaning it handles all medical-related expenses that aren’t covered by any state grants.

Trumbull County’s jail, which has a daily average of about 290 to 300 inmates, contracts with Niles Dr. Philip Malvasi for his services and his support staff at $395,714 per year. After other costs are factored in — the contract is not all inclusive — Trumbull County spends about $700,000 on medical services for the jail, said Maj. Dan Mason, Trumbull’s jail administrator.

The deal was struck when Trumbull County commissioners did not receive any other bids except from Malvasi, but it was canceled and adjusted in December 2018, to eliminate the controlled increases and the second and third years.

Trumbull commissioners did not rebid the medical contract before again selecting Malvasi for the 2019-2020 contract at $395,000.

While some expenses for the medical program went up, a big portion of the increases in the cost of the contract is Malvasi’s medical malpractice insurance, Mason said.

Last year, the premiums increased by $18,000, and it went up again for the next contract, Mason said.

But, in Mahoning County, all-inclusive means all inclusive. Wellpath has a legal team that takes care of malpractice insurance and any claims that might be filed.

Inmates in any jail, in any county, in any state will file suits complaining about the medical care they receive while locked up, Kountz said.

“We are out of the malpractice business completely. The corporation handles all of that. They provide the nurses and the aides and the legal team, everything,” Kountz said.

Mason said the benefit of having a local doctor in charge of the medical program is the easy access officials have to ask him questions. And the county’s insurance helps defend suits, Mason said.

“We have 24/7 access to Dr. Malvasi,” Mason said. “The holiday, the weekend — anytime we need him we can call. That is a benefit we don’t want to give up, we want to maintain that relationship.”

In Trumbull County, the jail has to pay for medical expenses outside of the contract in numerous instances, including times when a person has a prior issue, such as when a pregnant woman has regular checkups, dental issues, ambulance ride,; X-rays, lab services and hospital stays.

But Malvasi handles pre-employment screenings for the sheriff’s office and testing for diseases such as hepatitis, HIV and tuberculosis, Mason said.

Kountz said Mahoning County is hoping to save some money on its latest contract by making adjustments: If projections measure out, the 2019 contract will have cost $1.8 million, down from $2 million.

Mason and Kountz both said the state puts too much of a burden on county taxpayers to pay for the medical care of inmates, without offering enough state assistance.

When a person is incarcerated, even if he or she hasn’t been convicted of a crime, they can’t use Medicaid unless they are admitted into a hospital, so the burden falls on taxpayers, Mason said.

“If they had insurance on the outside, they should have insurance in here,” Mason said.

Both also said their respective mental health and recovery boards do a lot for the inmates and the facility, offering some treatment options and assessments.

STRUTHERS — A new treasurer is in place for the Struthers City School District. Ryan Cene of Poland was ...

CANFIELD — City council on Wednesday shot down talk of opening any gun ranges in Canfield. It was the final ... 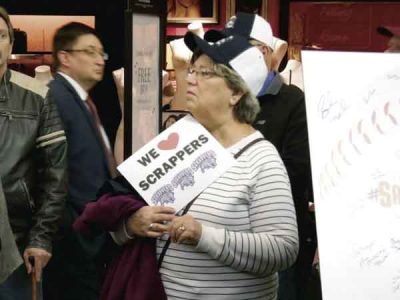 WARREN — While not a lot of people showed up for the first day of early in-person voting in the Mahoning Valley, ...